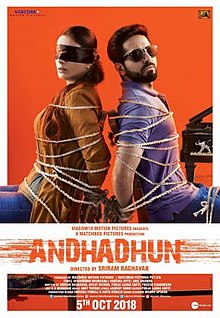 The boys take a dive back into Bollywood with Andhadhun! “The Blind Melody” is a rough English translation of Andhadhun. This fantastic black comedy crime movie took both of the boys by surprise when watching it for the podcast.

You can find it for free on Netflix right now which we highly recommend watching beforehand because man some of the places this movie goes are wild.

One thought on “Episode 246: Andhadhun”

Guys! Thank you so much for watching both my suggestions. Really enjoyed these episodes a lot.
Also the thing about The characters speaking English is pretty normal. We have many languages in India and majority of indians speak English as their second language. Also speaking fluent English is seen as “being cool” here.

Just in case you wanted to go more into Bollywood i have a few suggestions.

1)Gangs of wasseypur(available on amazon prime): it’s a five hour long gangster film which was split into two parts because no one would release a five hour movie lol. It’s godfather-esque.
2) Baahubali 1 and 2: This franchise is basically a mythology like Hercules(the only thing i could think of lol). But it was super successful. The second part of this movie is the highest grossing film domestically.( “Dangal” is the highest grossing indian ever cause it did really well overseas).Also, this is not a Bollywood movie, it’s from the Telugu language film industry coined as Tollywood