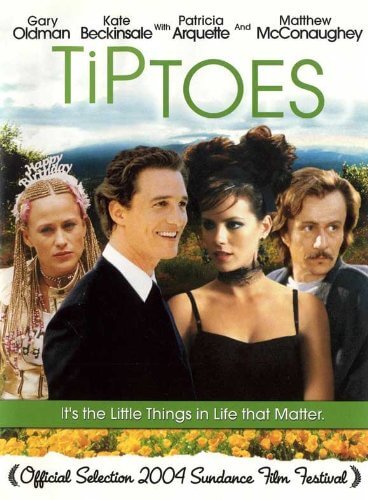 The Other Half tackles, Tiptoes with first-time guest James. The movie Gary Oldman would probably love to erase off his IMDB page.  He plays a little person…. across from an actual little person (Peter Dinklage) who is French for seemingly no reason. The movie tries to tiptoe around its seemingly dark premise of bringing a child who will know a lifetime of pain romantic comedy wrappings. But no it still comes across dark as hell. It’s one of those bad movies that started off trying to say something good, but then undercuts its message drastically.

“According to Peter Dinklage, the original cut of the film was “gorgeous”, but the director was fired shortly after turning it in, and the people who fired him recut the film into a “rom-com with dwarves”

Also, Matthew McConaway appears in this movie as well…. but he’s way less sexy as a troubled man.