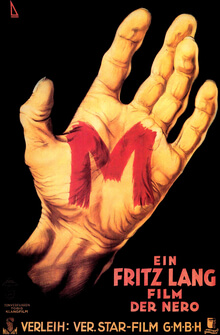 M is one of the first police procedurals ever made as it follows a child serial killer’s effect on an entire city. It somehow gets grimmer. Made in 1931 in Germany, this movie was considered too progressive and was banned by the Nazi party. It’s absolutely wild watching a movie that’s about 90 years old and see how human nature doesn’t really change.